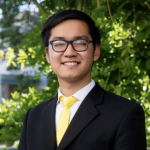 It’s officially a new year which means it’s time to recognize the 🎄 December 2022 Members of the Month ❄️!

Tony has been serving UNR as Club President and has done an excellent job. He served as Kiwanis Family Relations Chair last term and has used the skills he learned in that position to strengthen Kiwanis relations this year. Tony is very kind and he works very hard to make sure all members feel welcome. As President, he has dealt with the ups and downs better than anyone else could. Tony always has a positive attitude and I can’t wait to see him finish out the term strong!

This month, Mahdi has continued to provide his club with service opportunities. Mahdi’s home club usually hosts the general meetings virtually so he and his board make sure to find many service opportunities for the club, especially with help from their sponsoring Kiwanis Club. Mahdi also set up a day to decorate a float for the Rose Parade, which wasn’t part of Go West. Mahdi has continued to make steady growth in his position and looks to finish strong for the rest of the term.

This board member has been working hard on organizing certain events and making sure that our fundraising totals are thriving. They were able to go above and beyond by hosting a large fundraiser called Open Mic Night where our members could showcase their own talents too. He even went out of his way to promote the club events and plan different fundraising opportunities in the future.

She has served as an Executive Board member as Treasurer this term and helped her home club through fixing financial records, solving tax identification issues, budgeting, paying for District events/dues, and more. She has gone above and beyond her position doing communication and planning for her club. She attends many events and always carpools with others as well. She truly is a reason why her home club is doing so well financially this term and they wouldn’t be where they are without her hard work and effort.

Lorenzo has been an active member since last term and has shown a great amount of engagement to his home club. As his club’s treasurer, he has been actively aiding the club’s events such as their Induction Night and FTC. Lorenzo has brought amazing positive vibes throughout every event he’s attended and always checks in on every individual. He is the definition of a superstar leader! Keep up the work Lorenzo!

Bidane is the Vice President of Service for her home club. For most of the fall semester, Bidane has been planning Fall Fun Fest, UC Berkeley Circle K’s annual fall single service project where the club hosts a carnival of games and activities for kids in Oakland! The preparation for Fall Fun Fest was formidable as the last fall single service project was three years ago in 2019 due to the COVID-19 pandemic. Despite this time gap, Bidane confidently led many committee meetings to brainstorm the event and contacted former UCBCKI Service Chairs for resources and advice. All of her time and hard work led to a very successful event as over 30 people participated in the games and had lots of fun winning prizes. Bidane’s efforts were instrumental in carrying on the club’s traditions as many people in the club have not experienced this service event before.

Beyond Fall Fun Fest, Bidane is very passionate about service and has been doing an amazing job of supporting the club’s Service Chair and promoting service to members. She even achieved the Bronze MRP tier before Fall Training Conference! Bidane is an outstanding VPS and undoubtedly deserving of Member of the Month.

Leah is the Service Projects Chair of her club and dedicates a lot of time towards organizing events for CKI. She put on a successful Servathon and has already planned two interclubs with UCLA for winter quarter. Leah engages with her board and attends social events that help with membership and retention. Leah is very deserving of Member of the Month!

Despite having an absurdly packed schedule, Philsim is still able to bring a great amount of energy to every general meeting, DCM, and service event he attends. An example would be earlier this month at Installs, where room booking became an issue. Phil was clearly determined to make Installs happen, so he quickly found a spare room where we could host. On top of that he volunteered to do a talent act for the members. Another example is his willingness to drive all the way from Santa Cruz to San Jose to participate in the Christmas in the Park Service event. Phil stayed for the required shift hours and more to ensure smooth flow in the food truck. These efforts undoubtedly display great dedication to the club as the Club President, and his influence should not go unnoticed by everyone else.