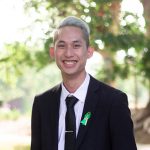 Welcome to the third week of Member Recognition Mondays. Here are the southern divisions wrapping up the final spotlight of members who have inspired others to stay in CKI this term. Read about the spotlights below and why they were chosen!

🍊Citrus Division🍊
Nhi Bui, Cypress College
Nhi uses her shy demeanor to inspire more reserved members to become active within her home club. As treasurer, she has improved her clubs’ fellowship by creating Eat for Service fundraisers to provide a foundation for new friendships and social interactions. One of her more recent ones was her Ding Tea and Seaside Bakery Socials. During meetings, you can often find her interacting with different members and also reaching out to fellow Citrus Cuties such as UCI CKI members.
Fun Fact: Nhi loves 85 degrees bakery!

🚊Metro Division🚊
Nicco Acuna, El Camino College
Nicco has been very involved in the club, divisional, and district levels through various opportunities. He has consistently attended service events and his friendly attitude makes him an easy individual to talk to. Nicco also decided to take his leadership to the next level by being involved in the media team at Fall Training Conference. Overall, his positive attitude and funny outlook on life make him an awesome member of Metro. Keep up the great work Nicco!
Fun Fact: Nicco likes cameras!

🍍Paradise Division🍍
Giemar Lozares, San Diego State University
Giemer can be found always interacting with both returning and new members. He tries his best to interact with everyone within his home club during general body meetings, socials, and events. When new members go to their first GBM or event, Giemer is always one of the first introducing himself and engaging with new members. He interacts with them, adds them on social media, and continues to build bonds with them. Giemer is someone who leads by example. He shows his dedication and passion for service and Circle K and that aids in other members doing the same. He has left a positive impact on the club and whether you’re returning or a new member, Giemer is definitely someone you know.
Fun Fact: Giemer loves cycling and has biked 35 miles in a day!

The new year is approaching, as well as a new prompt for January Member Recognition Mondays! Nominate someone who has shown potential as a future leader throughout this term.

Stay tuned for next week as we go into November Member of the Month!﻿